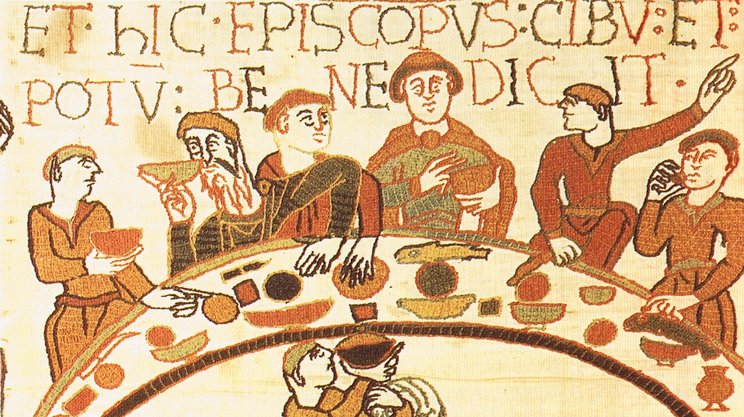 Table differences between social classes in the Middle Ages

Chickpea, broad bean and chestnut soups, along with milk and cheese, lard and sometimes eggs. Poor wine that tasted like vinegar.

It was what was on the table of the poor, especially in the city.

Poor and peasants lived with the “fruits of the earth”: wheat, barley, rye, oats, millet … The cereals harvested were cooked for a long time in copper pots, to become a sort of unappetising polenta, free of spices but also of sugar and salt, the first very expensive, the second almost precious.

The main food was bread. Dark, rich in fiber, cooked once a week. In addition to the loaf shape, it has the shape of unleavened buns and is kneaded with different flours, poor cereals, bean or acorn flour, bran and, in times of dearth, even “enriched” with sawdust …

When the situation was better, they ate broth of hen and tripe, entrails.

Not bad if the quantity was right, proteins and vitamins were sufficient.

In the lunches of the rich, instead, there was great abundance of meat and when were guests they offered the most precious food, cooked with expensive ingredients like oriental spices (a nutmeg can cost as much as a good horse) or sugar (brown because of cane, which arrives in Venice wrapped in palm leaves).

At official banquets, or for weddings, the courses were so many (even 50) that the diners couldn’t taste them all.

On the table there were “triumphs” of roasts, game, fish, accompanied by a great abundance of sauces and “savori” (green sauces, dolceforte, agresto, or based on fruit or aromatic plants, with pine nuts, almonds, truffles) that serve not only to season, but to hide scents of unsanitary.

Italian peacocks roasted on a spit, full of truffle …

Fricassee of hare with onions and mint.

The roasts, first boiled in water to soften them, appeared “as alive”, reassembled and covered with their plumage or fur. On the table come roe deer, wild boar, herons, peacocks resting on large trays of wood or silver, with spectacular sets made to amaze and arouse the admiration of diners.

The strange thing is that today, with the necessary differences, our table is much more like that of the peasant houses, healthier and more genuine than the ones of the noble palaces.