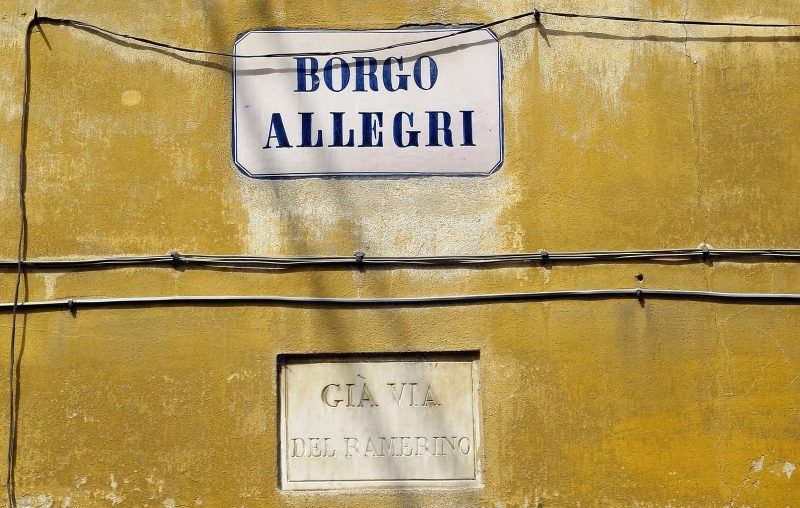 Via dei Malcontenti, formerly Via della Giustizia, recalls the state of mind of those who walked it before being executed. Those condemned to death were escorted in chains from the Bargello towards Piazza Santa Croce and in via di San Giuseppe received the last sacraments. The executions took place immediately outside the city walls. Ironically, the procession, before entering via de’ Malcontenti, crossed Borgo Allegri which ran parallel to the walls, just beyond the “Porta San Piero” (near the arch of San Pierino). In ancient times the road was divided into various sections and had different names: from via San Giuseppe to via Ghibellina it was called via della Stufa di Santa Croce, with reference to a public bathroom (stove) where you could wash yourself with hot water; from the corner with via San Giuseppe it was called via del Ramerino (the Florentine name for “rosemary”); the second stretch, up to via dell’Agnolo, was called via della Salvia (Salvia means sage), a clear link with the numerous gardens in the area. Only the last stretch, now incorporated in Piazza de ‘Ciompi, was called “Borgo Allegri“.

It seems that its name derives from the Allegri family who had their houses there, but there is a legend that the name derives from the popular “great joy” generated by the visit of King Charles of Anjou and his entourage to the studio of Cimabue who he was painting an extraordinary Madonna.

Vasco Pratolini, who dedicated one of his most famous novels, Il Quartiere, to the Santa Croce district, also tells: in an ancient age, an image of the Madonna painted by an immortal fellow citizen, and carried in procession, among the people, “making them happy”. And so – perhaps – the name of Borgo Allegri was born, a popular street full of “artisan shops”. Here at no. 83, there was Cimabue‘s house, today remembered by a plaque, where the young Giotto also lived and learned the “trade”; the brothers Bernardo and Antonio Rossellino also worked in the same street. A little further there (today it is “Piazza de’ Ciompi No. 11 “), there was the house of Lorenzo Ghiberti.

A king, a miracle and many great artists, there was just to be happy.