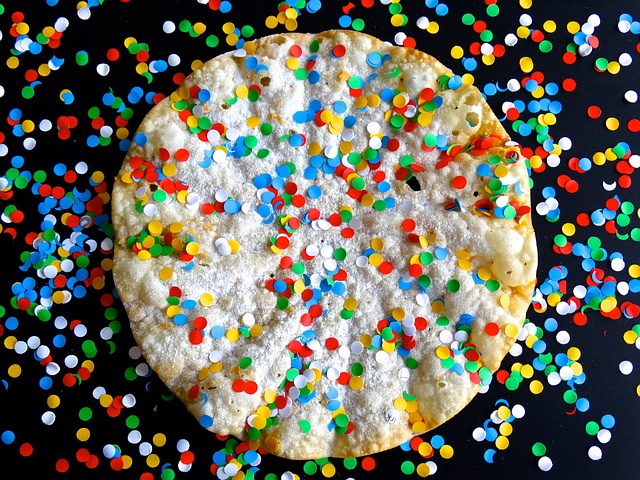 For the Ancient Greeks and the Romans, the Dionysian festivities were days with “no obligations”. These days were made of fun, and everything was allowed by concession of unbridled jokes and debauchery. All shyness could be (and still can be) written off by hiding behind a mask.

This freedom is also present in the traditional Carnival cuisine, with fatty, calorie-rich food, all to be consumed while waiting for the Lent. The real excess is, however, in sweets: in fact, a different sweet specialty can be tasted every day. They are all made with simple and poor ingredients: egg yolks, flour, sugar, baking powder, some grated rind of lemon and / or orange, butter, and a little milk. All Carnival delicacies have the same ingredients: among them are the berlingozzo (typical of Shrove Thursday), the schiacciata alla fiorentina (a soft, spongy cake available during the whole carnival period), the cenci (Mardi Gras fritters) and the brigidini (with an added anise flavour).

ITALY’S MOST ANCIENT CARNIVAL, YEAR 1539
The Carnival of Viareggio may well be the best known, but the Carnival of Foiano della Chiana (AR) is the most ancient Carnival in Italy, with a history of over five centuries. During five Sundays in a row, the historical village streets become a stage for masks, music and festivities in honor of the King of Carnival: the Re Giocondo.In the streets, a parade of four large carnival floats can be enjoyed. The floats are created in the four quarters of the village of Foiano, each respectively representing their side: Azzurri, Bombolo, Nottambuli and Rus. The challenge of the Carnival floats has taken place for centuries, displaying some true artistic works of papier-mache.Re Giocondo opens the parade: a puppet made of rags and straw, a symbol, according to peasant culture, to glorify rebirth, to celebrate the disappearance of darkness, to get over the past. On the last day of the festival, a real funeral takes place, where the King’s puppet is burned on the main square, to celebrate the end of winter.
To quote Lorenzo the Magnificent’s famous lines, “Whoever wants to be happy, let him be so: of tomorrow there’s no knowing.”