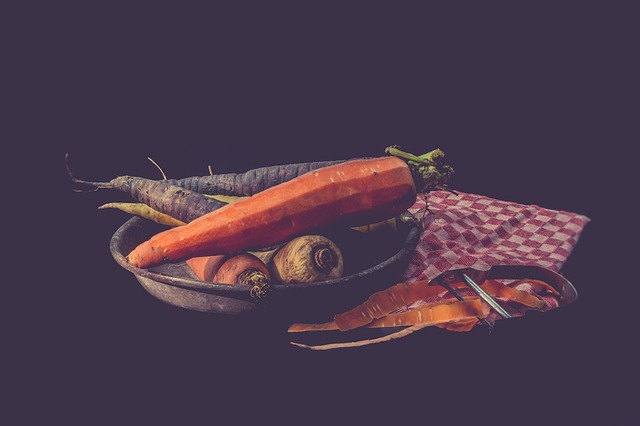 It is called “plum color”, or “green pea”, “orange as the carrot” or “red as a tomato”. Yet soon on the shelves of supermarkets and at the greengrocers we could see all the colors. White, purple, yellow and orange carrots. Red, pink, yellow, white, green, purple and black tomatoes.

Native of the south-eastern Europe and western Asia. Its name derives from the Greek Karotón. In ancient times the therapeutic beliefs on carrots were different: diuretic and abortive for women, aphrodisiacs for humans and used to treat impotence.

To get to be cultivated and used in the kitchen, you have to wait for the Arabs who bring them to Spain and pass by Caterina de ‘Medici, and thanks to her they became worthy to be eaten by royal families. If we look for them in the paintings, we see purple or white carrots, never orange. In the “still life” you can also see black, red and green carrots, but researchers and all experts agree that: the natural color of carrots is purple. Beautiful, sweet but fallen into oblivion: the fault of the Dutch peasants who, in 1700, under the dynasty of Orange and in honor of the queen, decided to cultivate only the orange ones.

There are currently five varieties of carrots: the classic orange carrot, which contains vitamin A; the purple carrot, rich of polyphenols and other antioxidants also present in wine, which is good for circulation and fights free radicals; the yellow carrot rich of lutein, a vitamin that protects the macula of the eye; the white or red carrots are less interesting from the nutritional point of view.

The juice of the classic orange carrot is very rich of carotene and therefore of vitamin A. But it is also rich of vitamin B and vitamin C, and this explains its restorative action and its effectiveness in some eye diseases. To remember that, to maintain all its properties, the juice must be extracted raw.

Centuries ago the tomato was just a plant that grew wild in the Andean region, that the Indians didn’t grow. Somehow this extraordinary plant arrived in Mexico, where the Aztecs called it xi-tomatl and in a short time the tomatl sauce became an integral part of Aztec cuisine. With the arrival of the Spanish, the “golden apple” began the long journey to Europe, but from their seeds began to sprout tomatoes less and less gold and more and more red …

It is now established that the main coloring agent contained in the red tomato (lycopene) is an antioxidant that acts against free radicals. However, in our garden today we can grow seven ancient varieties of tomatoes in different shapes and colors in addition to red: orange, yellow, white, green, blue, black that vary the amount of lycopene of the red one, adding other properties.

Black tomatoes, highly researched because they are rich of anti-cancer substances. The pink tomato, an hybrid more delicate and less tasty than red. The white one is not so tasty and is used to contrast the salads. The delicious orange that tastes like muscat. The green tomato (a “green” species even when it is ripe, not an unripe tomato) made famous even in Italy thanks to a film, is required not only to be fried but also, to make jams because “the green” is generated by sugar. Finally, the yellow tomato, son of the original that came from the Americas, which is sweet and sour and is used to balance the green one in jams and for recipes and salads that require a sour taste.