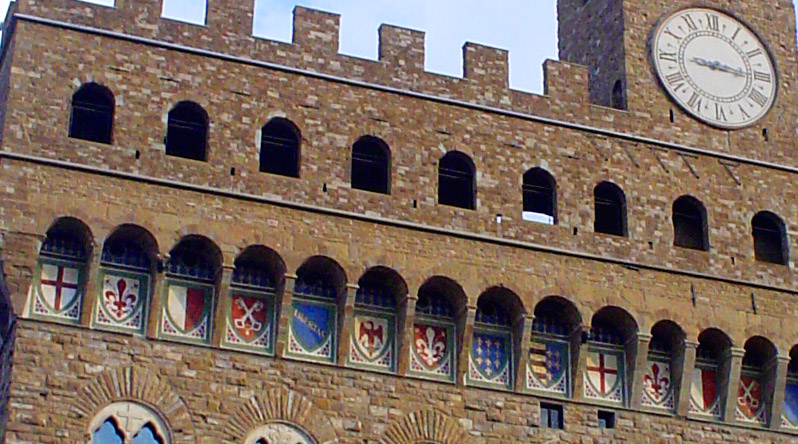 A lily had been used during the First Crusade (1095) as a sign of the city of the flower, but what is called the Lily of Florence is not a lily, it is a spontaneous iris that is found in the Arno valley and in the hills around in Florence. The most common colors are light purple (Iris Pallida) and dark purple (Iris Germanica), in addition to the white veined blue (Iris florentina).

On the front of Palazzo Vecchio we can see the two original versions of the lily: white in a red field (the Ghibelline one used for over two hundred years, it is “the ancient weapon of the city”. Over the centuries it was used as a symbol of the Ghibelline Florence , but it remains a reminiscence of the primeval coat of arms of Florence) and red on a white field (that of part Guelph). In 1252, a lily in relief appeared on the Fiorino, the official currency of Florence, and since the gold florin imposed itself as a bargaining chip in international trade, the lily and the city of Florence were known throughout the world.

In 1266, with the definitive defeat and expulsion of the Ghibellines from Florence, the Guelphs, wanting to keep the lily in their banner, decided, in contempt, to overturn the colors of their adversaries, and the red Lily in a white field was adopted as a definitive symbol of the city of Florence.

And speaking of France, the only one who tried to change the red lily with another symbol, as a sign of submission to the French Empire, was Napoleon, with a decree dated 13 June 1811.

But Florence rebelled and his vigorous protests also prevailed over the emperor. The lily remained in its place.

It was only on 25 July 1929 that a Royal decree described it and inscribed it in the “Heraldic Book of Moral Entities”. It put an end to the confusion created by the use of thirty lilies which, with small variations, were used to accompany the name of Florence. Since that day

The emblem of the City of Florence is constituted

from a perale shield with the silver background

at the center of it is a red buttoned lily.

Peral shield: ogival with the tip at the bottom