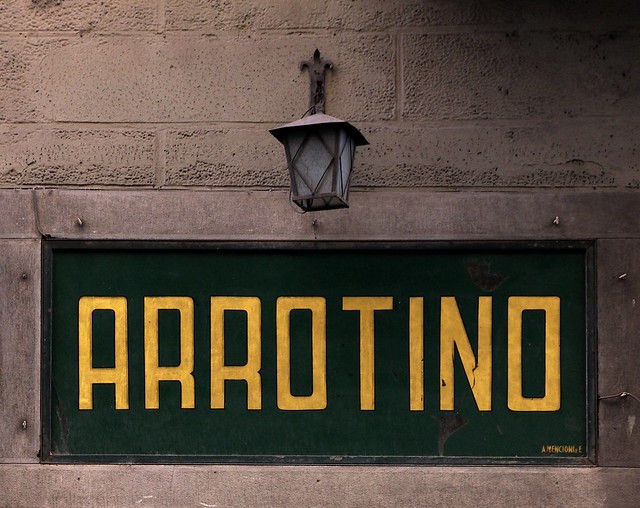 He came by bicycle, a strange bicycle, but even before he appeared we knew that he was coming under our home.

“Women there is arrotinoooo! (the knife grinder)”

It was the cry that announced his passage, his advertisement. The knife grinder locked the bike on the stand, connected a second chain to the pedals and pedaling turned a wheel mounted on the handlebar. The blades of the knives and scissors spurted sparks and became thinner and sharper lap by lap.

After the knife grinder, especially in the fall, we could hear a strange screaming and prolonged sound like this: “Ombrellaioooo – Sprangaiooo” (Umbrella maker – bar maker) Even for the umbrellas, it was time for a little treat. The umbrella maker moved around on foot, with the tools in a bag, an umbrella and a strange wooden cross-shaped tool. He sews up the canvas, adjusted the needles inside, replaced the handle or the tip, and everything “seemed new”.

In the early morning this mermaid announced a real delicacy to be consumed quickly: the raveggiolo, a very fresh, almost liquid cheese, mixed with cow’s and sheep’s milk, packed in a large leaf closed with a wooden toothpick.

Someone shouted in mid-morning: “Belliiii! Bellicaldi” (Beautiful! Hot and beautiful) , and from his basket covered with a white cloth, he pulled out sandwiches stuffed with a dark omelette: a “roventino”, or rather a “sanguinaccio” as they say in Florence, a focaccia made with pork blood, cooked on a high heat between two red-hot irons, salted and eaten there and then, very hot.

At lunchtime, the apron and the white hat of the tripe appeared on a tricycle with a white carrycot and a brass dome above. He stopped on the corner of the street, sheltered from the wind and let the scent spread around. It didn’t matter to scream that he had arrived. Noses ready and mouths greedy were attracted by that scent, and lunch was served. The Florentine-style tripe dish (with tomato sauce) and the lampredotto sandwich, as old as the world, still remain today the undisputed queen and king of street food in the historic center of Florence and beyond.