The UFOs cheer for fiorentina

The crowd stopped singing and all the witnesses spoke of a roar. At the Artemio Franchi Stadium that day there were at least 10,000 spectators, 22 players, ball boys, masseurs and coaches. Who writes these lines, was there.

Fiorentina was playing a derby with the Pistoiese. The purple team was coached by Fulvio Bernardini (the one who led her to the 1st historical championship).

Suddenly, around 2.20 pm the referee whistled a punishment in favor of Fiorentina and all the purple players looked towards the Fiesole corner.

In the sky there appeared a giant egg (definition given by Ardico Magnini, purple quarterback) and with him other round objects that floated above the Fiesole curve and then up to the Marathon tower.

For almost fifteen minutes the fans shut up, the silence fell over the whole stadium. Everyone looked at those flying saucers.

In the city too many others noticed the phenomenon. Many called the police and the local newspaper editors who were alarmed.

Meanwhile, strange flakes of white cotton wool fell from the sky … and the phenomenon lasted for about half an hour, the cotton wool deposited on the ground all over the city and beyond, from the hills of Fiesole and Mugello to the woods of Consuma … A cotton wool evanescent, difficult to take that became stringy and, like snow in the sun, melted almost immediately.

It was not easy to collect samples (a journalist, at the stadium, put it in a box of Turmak cigarettes), which were sent to the laboratory and analyzed. It emerged that the substance was composed of boron, silicon, calcium and magnesium. It was Professor Giovanni Casseri of the Institute of Analytical Chemistry who announced this discovery.

The hypotheses tried to interpret and clarify the story from a rational point of view, were many and sometimes ridiculous. The mystery still remains unsolved.

Perhaps the UFO came to see Fiorentina play by Fulvio Bernardini who played a spectacular football and then won his legendary first championship. 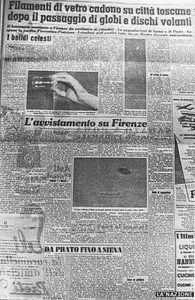 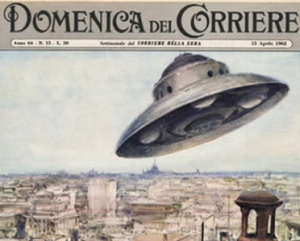