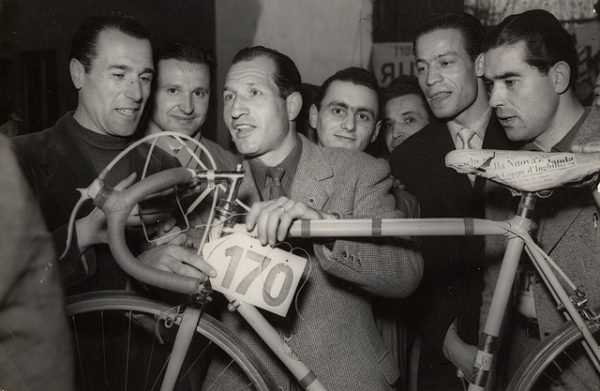 Gino Bartali, one of the most renowned Italian cyclist, also known as “Ginettaccio”

The 100th Giro d’Italia starts next 17th May from Ponte to Ema, where Gino Bartali was born.
On 7th August 1908, a headline on the La Gazzetta dello Sport announced that the newspaper would sponsor the first Giro d’Italia, scheduled for the following spring. It took 109 years to reach 100 editions (with two gaps, when the race was stopped during the World Wars), counting 68 winners and one team (Atala in 1912). Some riders won the ‘Giro’ five times (Binda, Coppi, Merckx), some three times (Bruno, Bartali, Gimondi, Hinault), some two times (Galletti, Girardengo, Magni, Galli, Anquetil, Balmamion, Indurain, Gotti, Savoldelli, Contador, Nibali) and some can only boast just one victory (including cyclist Pantani, who died at a very young age in 2004).
As already mentioned in a past issue of our “Zà Zà’s News”, every champion had his own ‘winning secret power’, and introduced something energizing and magic in their diets: zabaione for Alfredo Binda, mixed vegetables shake for Fausto Coppi…
According to Bartali, “everything is wrong, everything must be redone from scratch” … Before jumping on his saddle for the race, he had a robust Florentine T-bone steak”, rare on the inside, of course.

Gino Bartali won his three giri in 1936, 1937 and ten years later in 1946, after a long break due to the War. He also won two Tour de France, as well as numerous other races until his retirement, in 1956.
Bartali, in addition to being a champion, distinguished himself in those years for his courage while collaborating to save some families from deportation. During the German forces occupation in Italy, he was part of a rescue network whose leaders were the rabbi and the archbishop of Florence.
Using his bicycle as a hiding place for fake documents, he saved eight hundred people.

On May 5th, the day of Bartali’s death (he died in 2000), a “Settimana Rosa” (the “pink week” – the winner of the Giro wears a pink shirt) will take place to pay tribute to the rider who, more than others, wrote the story of the Tour and of Italy. The event is dedicated to him, with the opening The Bartali Museum and various other initiatives, including the reading of tales about his life at the circolo Acli and the presentation of Paolo Ranieri’s book “A colpi di pedale” (at the Museum).
The 11th stage of the Giro will start on Wednesday, 17th May at 11.30 am. It is the Appennine stage: four hills must be scaled in the absence of any tracks on plain ground – the Passo della Consuma, Passo della Calla, Passo del Carnaio and the Monte Fumaiolo. The race is also calling at Bagno di Romagna, where the Giro has set its finish line.