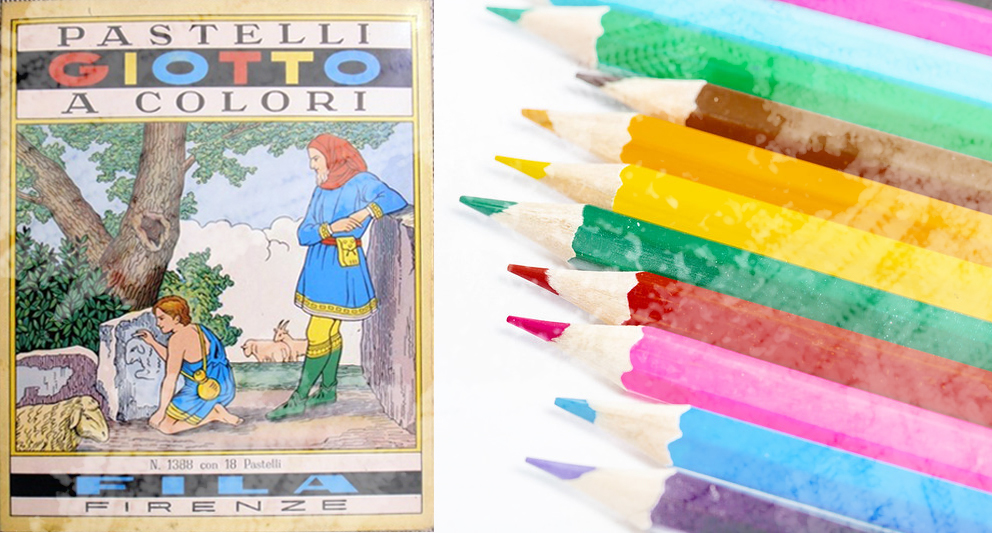 Who doesn’t remember the colored pencils kept in the case of the school folder and in the wooden box of the home desk?

A flash: a child who draws a sheep on a rock observed by an adult … It was the little shepherd Giotto, discovered by Cimabue, the teacher who from the country of Mugello, took him to study in Florence.

Since 1933 that design has been present on all the products of a Florentine company born in 1920, and its “Giotto” brand is an iconic reference that has entered the collective imagination that has accompanied children and adolescents to school, becoming synonymous with “color” for young creatives and artists.

It was June 23, 1920 when, on the initiative of a group of entrepreneurs (first president, Count Giuseppe della Gherardesca), was build the Italian Lapis and Affini Factory, F.I.L.A.

Its logo, a stylized Florentine lily that becomes the tip of a pencil, was designed by a graphic designer and illustrator more famous in Paris than in Italy: Saverio Pozzati, called Sepò.

Born with the ambition to manufacture and trade pencils, Fila objects and stationery, with the “Giotto” pencils first and with all the other brands (Tratto, Das, Didò, Pongo, Lyra) then, it went well beyond expectations of its founders, creating thousands of products for writing, drawing, coloring, modeling, painting and entering schools, homes, offices, studios and ateliers all over the world.