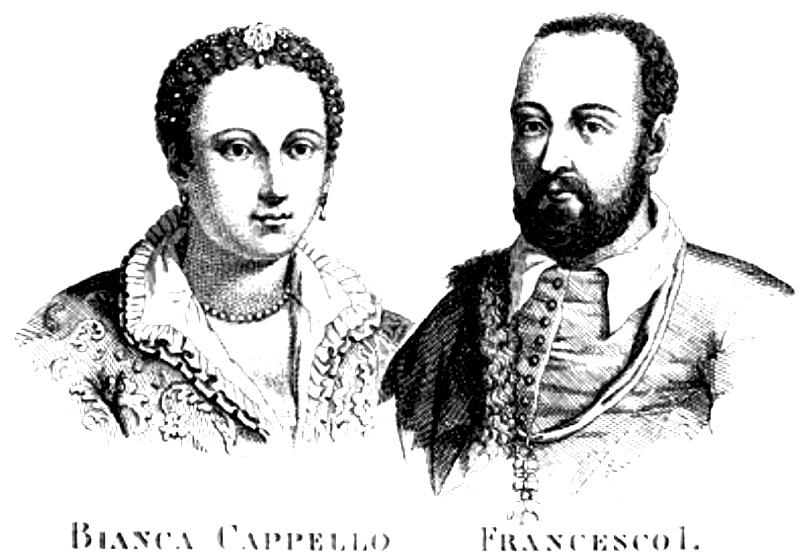 They disliked the opulence of their Court and its power intrigues. They loved simple things such as good food, country life and hunting: Bianca and Francesco loved each other tenderly and passionately, and wished to be left alone. Although their relationship was under everyone’s eyes, “He” was Francesco de’ Medici, or Francesco I the Grand Duke of Tuscany. He was already married to Joan of Austria, the Imperial Princess. This “political” marriage was never endured by Francesco, who was forced to live with the unattractive, insignificant, unkempt and certainly not nice Austrian princess, from whom, nevertheless, he got heirs and prestige. When the Princess died of labour at the young age of 32, Francesco was finally able to marry Bianca, whom he had fallen in love with from the very first moment: “He could not stop looking at me,” Bianca confided to her diary.

On 12th October 1579, the Grand Duke Francesco I gave the ring and married Mrs. Bianca in her palace, following a solemn ceremonial, and then kissed her. At the wedding reception in the courtyard of Palazzo Pitti, 30 angels were hanging in the air, each of them with a lily in their left hand and a lit candle in the right hand. After the wedding, she looked happy, but tired; she was beautiful but tired and pale. She was sick and craved more for love than for her wedding celebrations. On 8th October 1587, the Grand Dukes called a great hunt in Poggio a Caiano. Francesco’s brother, Cardinal Ferdinando, was also invited by Bianca with the aim of reconciling the two brothers. He had always criticized their relationship. Dinner was served, and the guests played “picchetto”, a popular card game at the time. During that very night, Francesco fell sick with high fever and vomit. He asked to be treated with bloodletting and mixtures, with no avail. Bianca took care of him with extraordinary love and dedication, but was weakened by her sleepless nights, and ended up with high fever and vomiting, too. Francesco died “in shivers and sweat” on 19th October 1587. Bianca, who was sick next-doors, serenely murmured “… in agreement with my desire, I must die with my lord.” Eleven hours later, Bianca Cappello closed her eyes forever. Their autopsy excluded the presence of poison, their organs were stored in four terracotta jars and buried in the crypt of the chapel of Santa Maria in Bonistallo, near the Villa Medicea of ​​Poggio a Caiano.

In 2005, under the guidance of Donatella Lippi, a group of researchers from the University of Florence obtained the permission to dissect the jars and examine their content. Thanks to the use of technologically advanced instruments, scientists have found evidence that significant traces of arsenic were present both in the biological fragments contained in the jars belonging to a non-specified male and female, and in those of Francesco de’ Medici and Bianca Cappello. A double murder for arsenic poisoning. More recent research, however, questions this latter evidence, stating that both deaths were due to malaria. A mystery for nearly 500 years.